The heart of San Marino narrates the history of a land for thousands of years suspended between earth and sky, a history packed with emotions that still continues to sustain and nurture the country’s inhabitants and traditions.

Today, the UNESCO has proclaimed this history a Heritage of the World, just waiting to be discovered.

Three fortresses crown the long ridge of Mount Titano, with the city of San Marino clustered at the foot of their walls. The first and earliest of the fortresses is Rocca Guaita, constructed in the 11th century. It served for a time as a prison and was rebuilt several times for different uses. It takes a bit of climbing to get here, but the tower is well worth a visit for the panoramic views of the surrounding countryside from its lofty perch.

The highest point for miles, 739-meter-high Mount Titano commands spectacular views from any of its three towers. The views stretch north west to the Apennines and east to the coast, Rimini, and on a clear day across the Adriatic to the Dalmatian coast. Three castles punctuate its long ridge, rising to the highest of them, Rocca Cesta. These are linked by a paved path, the Passo delle Streghe or Witches' Passage. The lower part of this is lined with kiosks selling snacks, drinks, and souvenirs, giving the mountain top the air of a carnival.

The neo-Gothic-style Government House (Palazzo Pubblico) with its square crenelated tower was designed by the architect Francesco Azzurri in the late 1800s and built of stone quarried on Mount Titano.

Piazza della Liberta is one of the most popular places to visit in San Marino because frequently throughout the day, the Guardie di Rocca change guard in a colorful ceremony.

This Neo-classical basilica was built in the early 19th century on the foundations of a fourth-century Romanesque church, also dedicated to San Marino (St. Marinus), which had been abandoned. The interior is classic basilica style, with a long nave and two side aisles lined with altars. The seven altars are worth seeing for their statuary and paintings, and the high altar has a statue of St. Marinus sculptured by Tadolini. An urn at the high altar contains the relics of St. Marinus. 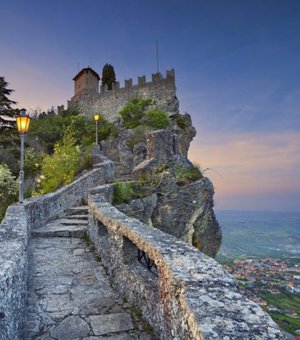